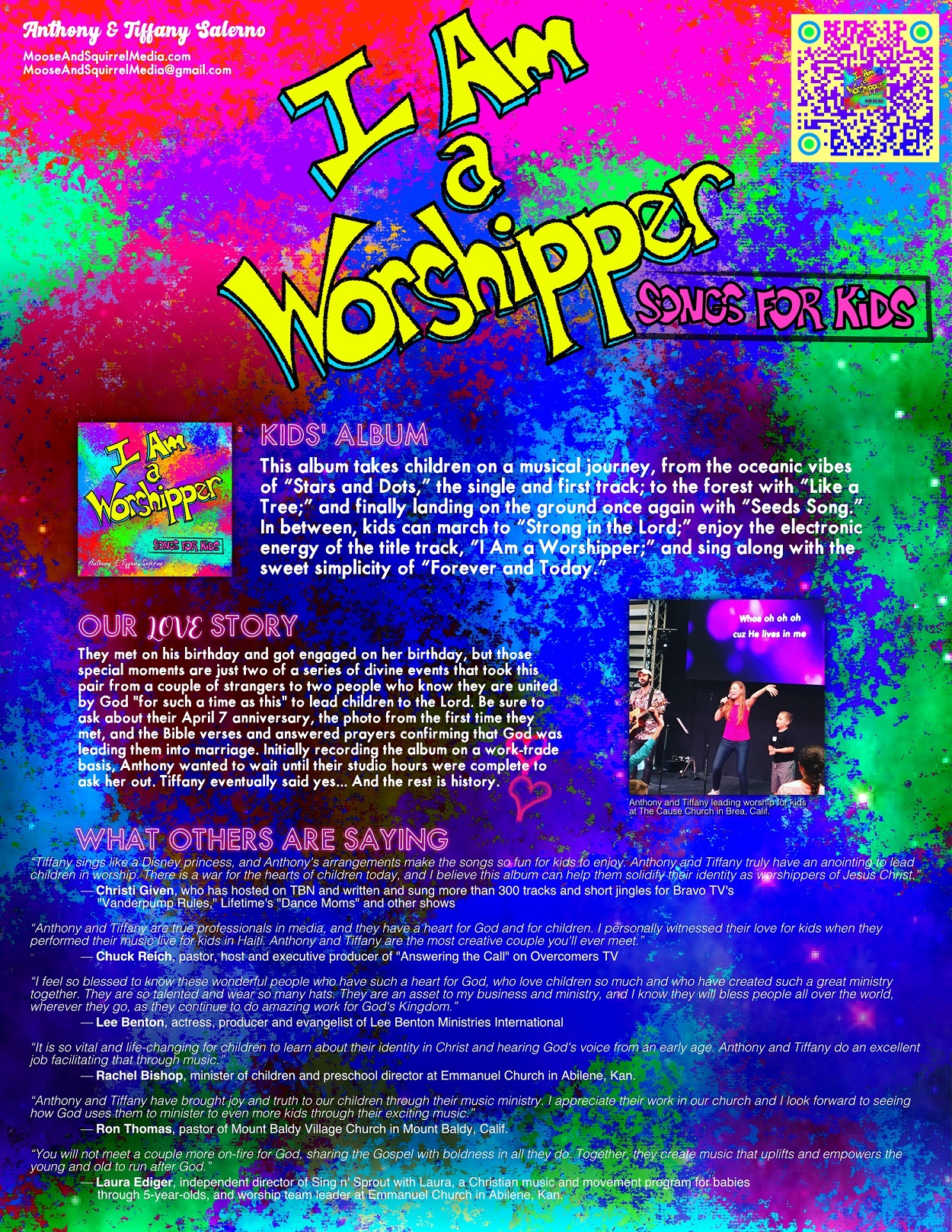 This follow-up single is part of Anthony & Tiffany Salerno’s roll-out to their debut children’s album, “I Am a Worshipper,” slated for release May 28. The single is available here and the album is available for preorder and pre-save here.

Anthony’s father, Tony Salerno, creative producer of gold, platinum and Grammy-nominated children’s albums, provided oversight and feedback for the forthcoming album, which leads off with “Stars and Dots” as the first track. 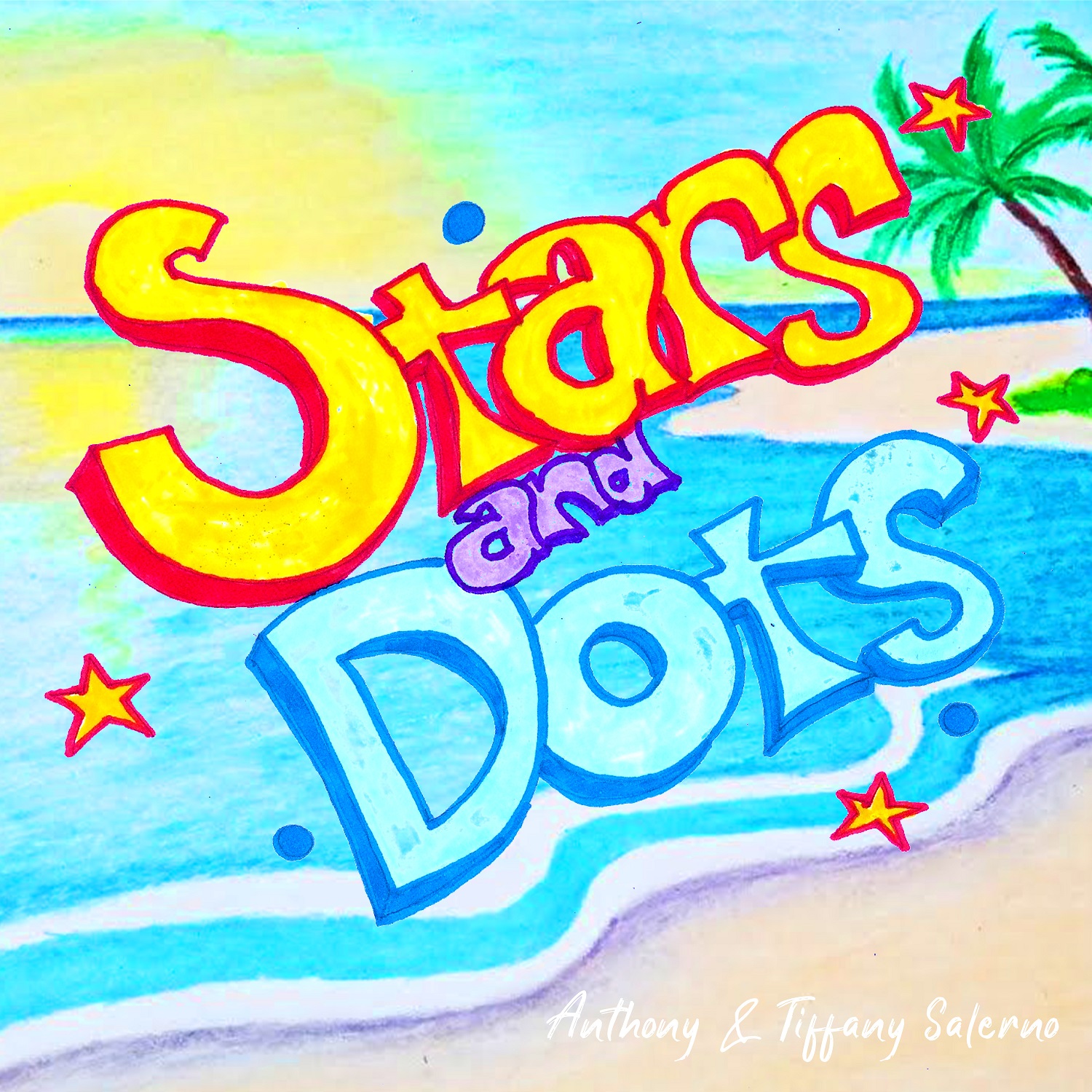 In the same upbeat vein, “Stars and Dots” has a cheerful tune with ocean vibes that introduces the practice of coming daily to God to hear His voice and discover His view of us — that we are immeasurably valuable and worthy of love because God created us in His image, Tiffany said.

“I’m excited for kids to hear this powerful song and the whole album, which carries the heritage of my parents’ music into a new era,” said Anthony, who grew up in Dallas, the Los Angeles area and the former home of Peanuts creator Charles Schulz in Sebastopol, Calif.

Inspired by Max Lucado’s bestselling children’s book, “You Are Special,” originally published by Crossway in 1997, “Stars and Dots” celebrates the truth that people can be liberated from the weight of others’ opinions by assigning value instead to what God says about them, Tiffany said.

Christi Given, who has hosted on TBN and written and sung more than 300 tracks and short jingles for Bravo TV’s “Vanderpump Rules,” Lifetime’s “Dance Moms,” and other shows, said she believes “Stars and Dots” could have a powerfully positive influence on children and adults.

“It has a very good message — to listen to God’s voice rather than comparing ourselves with others,” Given said. “Instead of focusing on how many ‘likes’ and comments we receive, we need to pay attention to what God says about us, which is the message of ‘Stars and Dots.’”

Chuck Reich, pastor, host and executive producer of “Answering the Call” on Overcomers TV, said he saw Anthony and Tiffany’s love for kids when they performed their songs for children at a church and a school in Haiti.

“Anthony and Tiffany are true professionals in media, and they have a heart for God and for children,” Reich said.

“It is so vital and life-changing for children to learn about their identity in Christ and hearing God’s voice from an early age. Anthony and Tiffany do an excellent job facilitating that through music,” said Rachel Bishop, minister of children and preschool director at Emmanuel Church in Abilene, Kansas. Bishop is a student of Visionwriters International, a ministry about identity and God’s voice that Tiffany said has greatly influenced her songwriting.

Tiffany wrote “Stars and Dots” before meeting Anthony on his birthday in September 2018 at CBS Studios in Hollywood. Anthony went on to provide music production and arrangement for the album, starting with “Stars and Dots.” The couple married in December 2020 at Mount Baldy Village Church in Mount Baldy, Calif., where they lead worship and direct the children’s department. 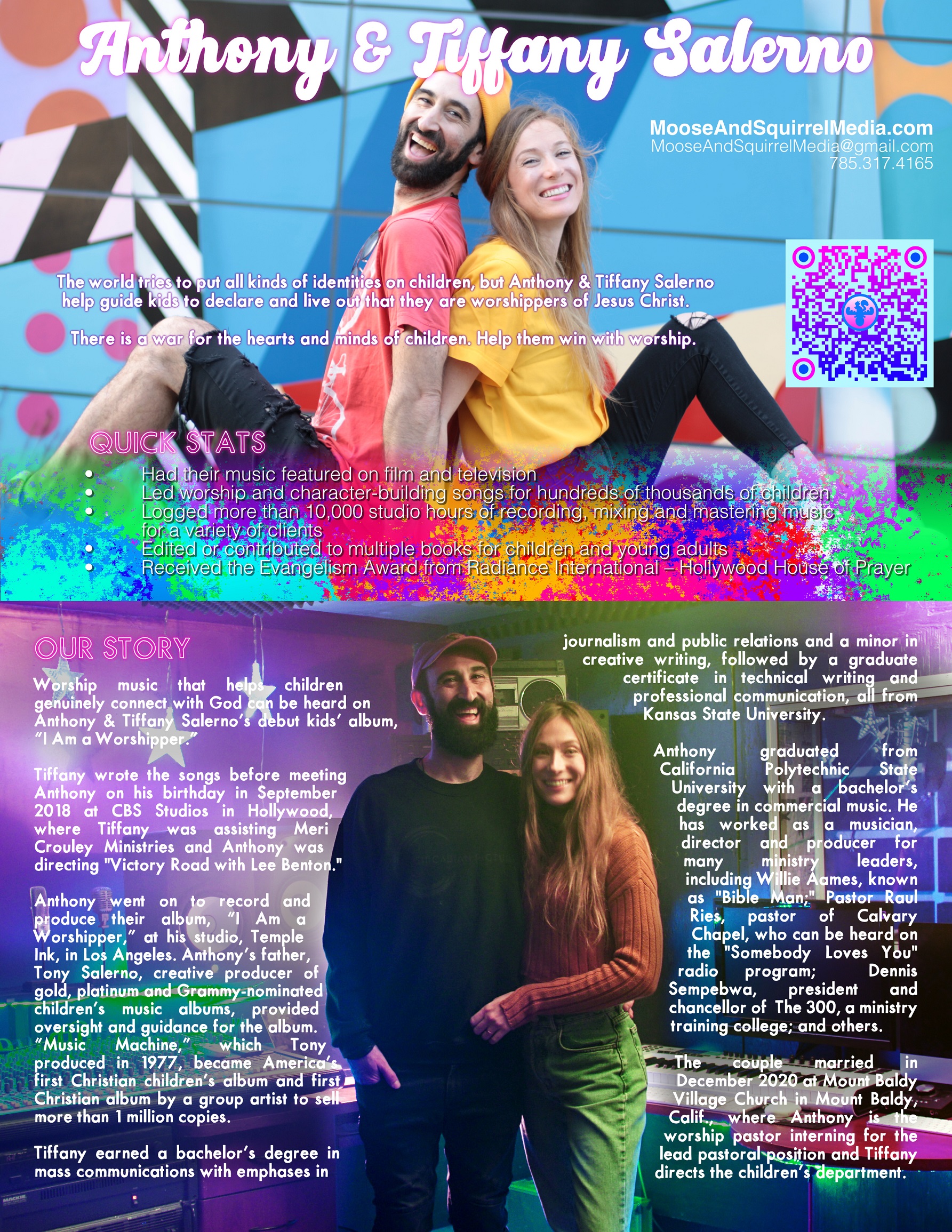 Tiffany earned a bachelor’s degree in mass communications with emphases in journalism and public relations and a minor in creative writing, followed by a graduate certificate in technical writing and professional communication, from Kansas State University. She later graduated from Radiance International – Hollywood House of Prayer’s Launch ministry school with the Evangelism Award. Tiffany was born and raised in Abilene, Kan.

Anthony graduated from California Polytechnic State University with a bachelor’s degree in commercial music. He has worked as a musician, director and producer for many ministry leaders, including Willie Aames, known for playing the title character in “Bible Man” (1995-2003); Raul Ries, who pastors a congregation of 12,000 in California and can be heard on the “Somebody Loves You” radio program; Dennis Sempebwa, president and chancellor of The 300, a ministry training college; and others.

Anthony was born in Tyler, Texas, where his parents launched Agape Force at a site that has been shared with the headquarters of Youth with a Mission (YWAM), Teen Challenge, Leonard Ravenhill’s Last Days Ministries, the evangelist David Wilkerson, the late musician Keith Green and now Mercy Ships. “Music Machine,” which Tony produced in 1977, became America’s first Christian children’s album and first Christian album by a group artist to sell 1 million copies.