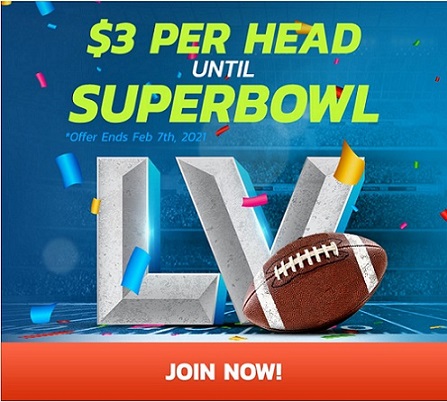 San Jose, Costa Rica, 2020-Dec-15 — /EPR INTERNET NEWS/ — Although the NFL Season has had some hiccups, sportsbook software providing organizations are preparing for the most important day of the year. Companies like Costa Rica based PayPerHead.com have already released promotions designed to help their customers gain as much profit as possible on the 2021 Super Bowl.

Year in and year out, the Super Bowl accounts for the most betting revenue of any single sporting event. The betting handle on the Super Bowl is worldwide. Massive amounts of money are wagered on Super Bowl Sunday. Estimates range from $5.0 billion to $5.6 billion.

The total bet on the 2020 Super Bowl, where the Kansas City Chiefs rallied in the fourth quarter to beat the San Francisco 49ers, came in at $5.2 billion. The amount represented a 6% increase from 2019.

Gamblers living in the United States placed at least $270 million on Super Bowl LIV. With the prospect of a game between two popular teams this season, PayPerHead expects their customers to see even more significant revenue.

The Kansas City Chiefs and 2020 Super Bowl MVP Patrick Mahomes have the best record in football. The popular Pittsburgh Steelers have a record that equals Kansas City’s. Over in the NFC, the Seattle Seahawks, New Orleans Saints, Green Bay Packers, and Tampa Bay Buccaneers all appear capable of making it to the NFL’s championship game.

The biggest stars in the NFL are quarterbacks, and most contenders for this season’s Vince Lombardi Trophy are led by big name quarterbacks. Drew Brees plays for the Saints, Aaron Rodgers leads the Packers, Tom Brady crouches under center for the Tampa Bay Buccaneers, Ben Roethlisberger plays for the Steelers, and Russell Wilson is Seattle’s quarterback.

Las Vegas books and sportsbook software agents are drooling over the prospect of a matchup between Kansas City and Mahomes and either the Saints, Buccaneers or the Packers. Quarterbacks for all four teams will make it to the NFL Hall of Fame, and the idea of a head-to-head matchup between the future hall of fame quarterbacks has everyone excited.

The company’s newest promotion allows new agents to pay $3 per head from when they sign-up until Super Bowl LV on February 7. Johnson said that the promotion gives new agents a chance to use all of the company’s bookie software, including their in-game betting, live dealer casino, and digital casino platforms.

“Players, a sportsbook operator’s customers, are most active from the NFL Playoffs to the Super Bowl. We want to give them a sense of how we’re better from their current software provider or introduce them to pay per head and how it can help them make more money,” Johnson said.

He added that most sportsbook owners who sign up with PayPerHead had no idea how much more the company had to offer. “I’ve gotten calls from agents who signed up with us marveling at how much more money they’ve made. That makes us want to fight even harder to help our customers succeed.”

San Jose, Costa Rica, 2020-Sep-09 — /EPR INTERNET NEWS/ — Although questions about how COVID-19 will affect the NFL remain, most football fans, analysts, players and coaches have turned their attention to the start of the 2020 season. The defending Super Bowl Champion Kansas City Chiefs host the Houston Texans in the first official game on Thursday, September 10. From September 10 to January 3, the National Football League hopes to play seventeen weeks of uninterrupted football before turning their attention to the playoffs and the Super Bowl.

The new season means more to pay per head bookies than it may to anyone else other than NFL players. Even during years when the NCAA has a Men’s College Basketball Tournament, betting handle drops off 20% to 30% after football season.

The coronavirus pandemic has already made the 2020 NFL Season unique. Many teams won’t play in front of fans. Teams that will allow fans, like the Atlanta Falcons, won’t play in front of full capacity stadiums. The lack of fans shouldn’t affect play on the field, as most people will be at home this winter watching the games across the country.

What could happen on the field is why so many are thrilled about this upcoming NFL season. It’s difficult to remember a time when an impact player like Tom Brady left his current team. Brady decided to leave the New England Patriots, a squad he won six Super Bowls with, to play for Bruce Arians and the Tampa Bay Buccaneers. Not only did Brady leave the Patriots but he ended up in the same division, the AFC South, as Drew Brees. The New Orleans Saints quarterback holds five NFL records. Brees and Brady face-off in Week 1 on Sunday, September 13.

Another quarterback battle has developed in the AFC. Kansas City’s Patrick Mahomes won the 2018 NFL MVP. The Baltimore Ravens’ Lamar Jackson won the 2019 award. Mahomes and Jackson are the favorites to win the 2020 Most Valuable Player Award. Also, their respective teams are the two favorites to win this year’s Super Bowl.

Tampa Bay and New Orleans in the NFC, along with the San Francisco 49ers and Dallas Cowboys, should spend all season jockeying for playoff positioning. In the AFC, the New England Patriots, who signed 2015 MVP Cam Newton to replace Brady, and Baltimore’s chief rival, the Pittsburgh Steelers, also figure to challenge for the conference championship.